This is a bit out of order as we did this before we drove south to Dunedin.

Flew into Christchurch from Sydney across the South Island mountains in an ESE direction, just as dusk was descending. Visibility was good and Mount Cook stood majestically in the evening sun with the glacial lake Pukako clearly visible behind.

This was a nostalgic trip to earthquake city for us as we were here during the earthquakes of 2011/2012 and last here just after that. We were interested to see what had changed. The whole cityscape is a patchwork of cleared plots and new buildings.

At least most of the debris has been cleared away and the new buildings are rising phoenix like from the ashes of destruction. The cathedral remains as it was – a shored-up ruin, overtaken by vegetation and pigeons. There is however finally a plan to restore it, so that is a good thing. Cathedral Square is virtually completely flattened. The buildings around the edge of what was once a square surrounded by buildings – shops and offices – is now open on all sides, although there is rebuilding going on. We remember so well standing in the square with masonry falling from rooftops.
The Arts Centre, which was originally a university and which includes Rutherford’s lecture theatre, was also badly damaged in the earthquake, and this is being painstakingly restored.
Public Art will be/is an important part of the new Christchurch and this is already evident throughout the City.
The botanical gardens are as beautiful as ever – and of course it is mid-summer so the englishness of the whole thing is unmistakeable, and there is a new visitor centre and cafe (of course).
and the tress are impressive (although apparently many of them are coming to the end of their life.)

Kiwis are very fond of their old cars and we stumbled across this impressive show of Rolls and Bentleys.
There are still some old buildings left which managed to survive the earthquake pretty much intact.
We also managed to get to Lyttelton, which was the area closest to the epicentre of the earthquake and which suffered very badly – whole streets flattened. This is rebuilding slowly and life is back to normal. 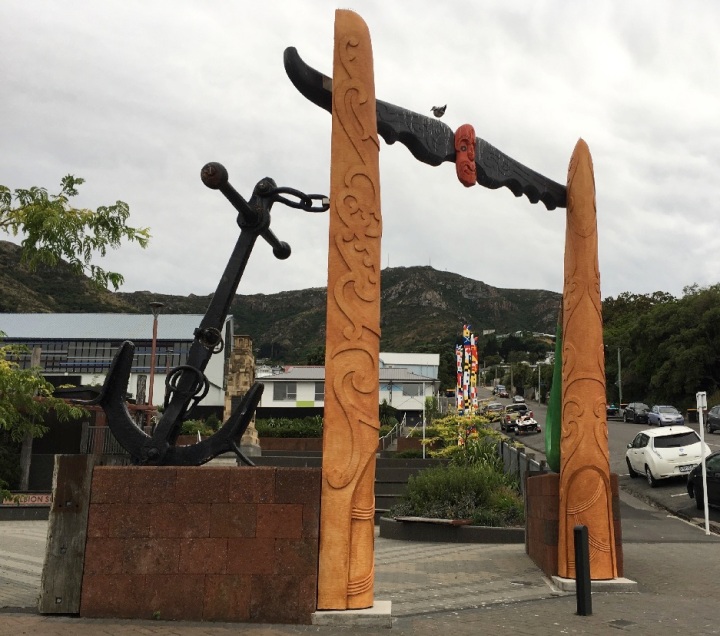 The area where the locals gathered at the time of the earthquake is now a park/contemplative space. The timeball station, just like the one at Greenwich, consisting of tower and attached building, and which was flattened by the earthquake (which also rendered the road around the headland impassable), is being partially rebuilt: they are rebuilding the tower but not the building. I think the ground is not suitable and the cost too high.

Please see the website at escriptorium.uk for more details of the project and the app